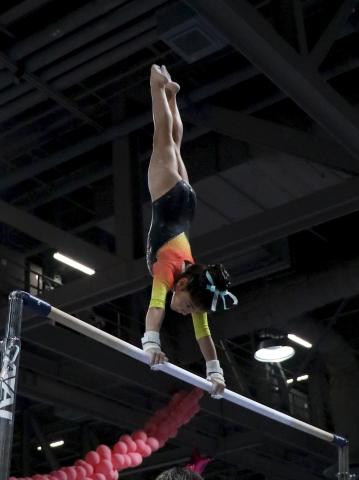 Wildfire’s last team competition prior to the SoCal State Championships was a three day event; that being, the Long Beach Open held at the Long Beach Convention Center. Appearing were 2734 gymnasts representing some 98 teams. Wildfire entered 26 athletes who participated in the Level 7, 8, 9 and 10 competitions. From this competition, these girls brought 11 top three All Around championships with an additional 37 individual event top three award rankings. This included 16 Gold Medal finishes, 5 for All Around. By the end, Wildfire came away with two team championships as well, they being for Levels 7 and 10. Fifty teams competed for honors as part of the Level 7 team competition . Wildfire, with a 9.650 individual event team average came in 1st as the leading scoring team from that 50. As part of the 16 teams representing to compete for Level 10 team championships, Wildfire posted the highest Level 10 team score of the meet, indicating a individual event team average of 9.500.

Of the 56 Level 8 gymnasts in her session, Wildfire’s Kaitlyn Tran ranked 7th among all of them she winning All Around Bronze as a Jr. C. (2nd Vault, 1st Beam - 9.700). Kaitlyn’s Beam score was the second highest of the entire count of 145 Level 8’s who participated at the Long Beach Open, which included every session and age group. Wildfire’s second Level 8 entrant of our team of two this year, finds Brianna Nguyen finishing 5th AA as a Jr. C, she placing 3rd on Bars, 2nd on Beam.